The following article appeared in the New York Times.

In Whose Best Interests?

IN divorced families, whose needs count for more: those of parents or those of children? 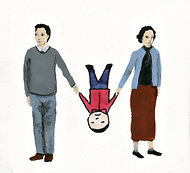 When parents divorce, their child custody plans are supposed to place the “best interests of the child” first. We know children’s needs change as they grow. Unfortunately, the way we develop and maintain custody schedules ignores that, and often makes children feel helpless by denying them any influence over the arrangements that govern their lives.

Today, most divorces involving children include a parenting plan that dictates where children will live and which days they will spend with each parent. The process of agreeing on a custody arrangement is often very difficult for parents, who naturally have little desire to revisit the divorce experience. As a result, the legal agreement they reach typically will govern the daily rhythm and schedule of children without change until they turn 18.

In reality, a custody agreement that meets the needs of a toddler is unlikely to be right for a teenager. Imagine yourself as a 13-year-old who wants to spend more time with your friends over the weekends. Unfortunately, your parents are divorced, and you spend weekends with a parent who lives two hours away. You would be unlikely to request a change in custody because it would mean altering a longstanding agreement and plunging into a morass of conflicting loyalties and guilt over betraying whichever parent would lose out. Faced with such dilemmas, children in divorced families frequently end up suppressing their own needs to reduce conflict with, or between, their parents. Even when children are driven to speak up and request custody modifications, their voices carry little, if any, legal weight.

Rendering children voiceless and powerless to meet their own changing needs, or burdening them with guilt if they try to do so, is in no one’s best interest. It either creates hardship for children who grin and bear it or instigates a string of provocative and damaging behaviors in those who embark on increasingly desperate attempts to make someone notice that something is wrong.

Although the United Nations Convention on the Rights of the Child states that children have a right to meaningful participation in decisions affecting them, adults, from some misguided notion of protection, often seek to keep children from making choices in custody matters. But accepting certain kinds of responsibility for their own lives and learning from the consequences of their decisions, even poor ones, is vital for the growth and well-being of all children.

Once children have reached the age of reason — generally agreed to be about 7 — they should be recognized as the ultimate experts on their own lives. We all resent it when others say that they know better than we do how we feel and what is good for us. Nevertheless, we subject children to this when we call in experts to evaluate their lives over a period of days or weeks, as part of the custody process, instead of just listening to them.

To remedy this, all parenting plans should be subjected to mandatory binding review every two years. The review should include a forum for children to speak privately with a mediation-trained lawyer. The conversation should be recorded to ensure that the child was not pressured or asked leading questions. Children should not be forced to state preferences but invited to speak if they choose. Many children will decline, as they are deeply reluctant to hurt a parent. But occasionally, the need to advocate for themselves outweighs these fears. When they do speak up, their wishes should be honored as stated, not as interpreted by an expert or lawyer.

The lawyer should meet with all family members, individually and as a group, to ensure that the child’s wishes are respected in the next two-year parenting plan. Children’s wishes should be decisive, in place of those of experts and judges, as long as at least one parent agrees with them.

Some may fear this system would result in young children being manipulated by their parents. But my almost 40 years of practice as a family and child therapist have taught me several things that suggest otherwise. First, that children can tell the difference between being bribed and manipulated, and being respected, understood and having their needs (including those for discipline) met. Second, that children consistently choose the latter over the former, if given the chance. And finally, that children have a clear understanding of their own needs — even if they are unable to articulate justifications or reasons for their wishes.

Of course, even after listening to children, the success of custody plans must still be evaluated. A proper assessment of children includes their functioning at home, at school and in having age-appropriate peer relationships. If, after following a modified custody plan for two years, a child is failing in two of the three areas, then it is time to consider whether a different plan is needed.

In 1970, no-fault divorce made its first appearance in the United States, in California, bringing recognition that both parents have an equal right to have access to their children. Forty years later, in 2010, New York became the last state to adopt no-fault divorce. But children’s rights are still routinely ignored. Will it take another 40 years for children to be heard?

Ruth Bettelheim is a marriage and family therapist.