What is the purpose of the Interview?

The purpose of a non-evaluative child interview (the “Interview”) is to listen to the child so that the child can express his or her views in relation to family breakdown or transition, and have them considered in decisions made about their best interests. The Interviewer does not assess the child, his or her best interests, or the parents. The interviewer’s job is to relay the child’s views to adult decision-makers.

The terms are sometimes used interchangeably, but for the purposes of this Society and the work we promote, a Hear the Child report (or Voice of the Child report) is a direct, often verbatim, record of the child’s stated desire. It is non-evaluative. It is not an assessment, an expert report nor an expert opinion and typically includes only information received from the child.

By contrast, a Views of the Child report made under Section 211 [see s. 211(1)(b)] is prepared by a professional assessor, such as a psychologist, psychiatrist, custody assessor or family justice counselor, but not a lawyer. While a Views of a Child report or Section 211 report includes not only the child’s views but also that of the parents and in many instances other personal or professional individuals involved in the child’s life. In this other type of report an assessment is often made by the professional assessor on whether the child is mature enough to have the opinion and whether there is evidence of influence or pressure on the child from a parent. A Section 211 report is an assessment, and is sometimes referred to as an expert opinion.

When parents cannot agree on the Interviewer or on whether or not to have a Hear the Child Report prepared, they will sometimes seek to have the preparation of a Report ordered by the court under section 202(b) or under section 224(1)(b) as a specified service. If a Hear the Child Report has already been prepared, a parent may rely on section 202(a) to have the Report admitted as hearsay evidence.

Who does the Hear the Child Interview and Report?

A private Interview is done by a qualified neutral professional who meets the criteria of the BC Hear the Child Society for its Roster (the “Interviewer”). The Interviewer meets with the child, typically for no more than one hour per session. The child is asked about such things as school, activities, relationships, living arrangements and specific matters requested by the court, counsel or parties. The child responds to the questions and provides input on the matter being resolved by the family but does not make the final decision. The process is often described as giving a child “a voice but not a choice” and their limited role in the decision-making process is explained to the child. With the child’s consent, the Interviewer listens to and then prepares a Hear the Child Report and shares it with those involved in making decisions about the child’s best interests such as parents, a judge, or other family professional. This entire process can be completed in a matter of days, depending on what is arranged with the trained child interviewer. (Note: A provincial Family Justice Counsellor may also be available to do a similar interview and report as a result of a court order, either by a Provincial or Supreme Court Judge. Their process is a little different and is described more fully on their website.)

What about the Child being interviewed?

How many interviews will a HTC Interviewer have with a child?

The Interviewer will meet with each child twice, ideally in person. The purpose of the second interview is to review the draft report word-by-word with the child, clarify the wording and make any additions or deletions requested by the child.

How is the Report process begun?

The judge (or master), mediator, parenting coordinator, party (parent), counsel or other person involved in a family justice process can initiate the process at any point in a family law proceeding where a child’s best interests are being determined, ideally on consent of the parties and as early on in the process as possible;

A trained Interviewer is selected from the Society’s Child Interviewer Roster (composed of lawyers and mental health professionals), contacted, and the fee and turnaround time for interviewing the child and preparing a Hear the Child Report are agreed upon, including how the fee will be paid and by whom;

The parties complete a background intake form about each child for the Interviewer;

The Interviewer sets up the Interview with the parents/parties who are encouraged to participate in either picking up or dropping off the child, and the Interviewer then has an opportunity to explain the purpose of the Interview to each parent/party and answer questions.

The Interviewer generally follows an interview structure: (introduction; establish rapport; separation specific information; explore; review (periodically and/or at the end of the interview); debrief and closure);

The Interviewer explains to the child the reasons for the Interview (to provide input NOT to make the decision), gives the child an opportunity to ask questions, and asks the child if he or she wishes to be interviewed;

If the child wishes to be interviewed, the Interviewer meets with the child, typically for no more than one hour at a time, (generally at the Interviewer’s office) to interview the child, with an emphasis on listening to and writing down the child’s views;

The Interviewer captures the child’s views verbatim as much as possible in writing during the initial interview and then reviews them with the child so they are accurate from the child’s perspective.

The Hear the Child Report

The parties, judge or other decision maker is encouraged to provide the child with information appropriate to the child’s maturity level about any final decisions that are made and what happened to the child’s views, with an opportunity for the child to ask questions about the decision. 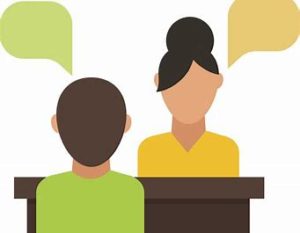 This informational video was prepared by young people for young people.
The BC Hear the Child Society is grateful for their time and efforts in creating this message.